Heavy rain on Friday evening, mainly on the Eastern side of the country, caused widespread cancellations or made batting very difficult on Saturday. Many schools also had an exeat weekend, with no matches.

There are alarming instances nowadays of schools not being able to raise even a 1st XI, let alone 2nds or 3rds, owing to revision mania. If you did not see my Thunderer piece in The Times last Thursday (on this topic), here is a link to it. All work and no play is not the way to revise for exams

There was an interesting response, one of which you can see here

There was a distinctly breathless hush in the Close (Clifton’s famous ground immortalised by Henry Newbolt) on Saturday. Clifton won the toss in lovely conditions and elected to bat but were soon under considerable pressure, losing early wickets to the impressive new ball attack of King’s Taunton and then to Jacques Banton’s left-arm spin (5-33). Captain Dom Goodman then batted impressively making 67 and, with valuable contributions from the tail, the home side posted at least a defendable target of 182 all out, finishing on the last ball of the 50 overs. The response of King’s was initially destructive but as wickets began to fall, some panic set in, leaving King’s on the verge of defeat at 106 for eight, largely as a result of tight bowling from spinners Ollie Meadows (3-28) and Ryan Kilmister (2-28). King’s then rallied brilliantly thanks to a very sensible partnership of 71 for the ninth wicket by Max Meizner (42 not out) and Harry Ascher (26). With only six needed from the last two overs, the game seemed won, but then Harry Ascherl bowled a wicket maiden. With six still required in the final over and nine down, Tudor Hurle held his nerve with the ball and when two were needed from the final delivery King’s scampered just a single to tie the game in a thrilling finish.

Nails were even more chewed to the cuticles at Wellingborough in rain-affected conditions after heavy overnight downpours. Stamford had posted only 117, but with 24 still needed Wellingborough were nine down. Cameron Blake (number 10) with 18 not out and Joshua Griffiths (number 11) 8 not out squeezed their side to a win from the penultimate ball of the match.

In a Twenty20 against Leicester Grammar School, Wellingborough’s Year 11 opening batsman James Sales recorded his maiden 1st XI hundred, reaching the milestone off 63 deliveries and eventually finishing on 110 not out. Having already picked up one wicket earlier in the innings Sales then took the ball for the last over of the Leicester Grammar School innings and took a hat-trick to win the game. 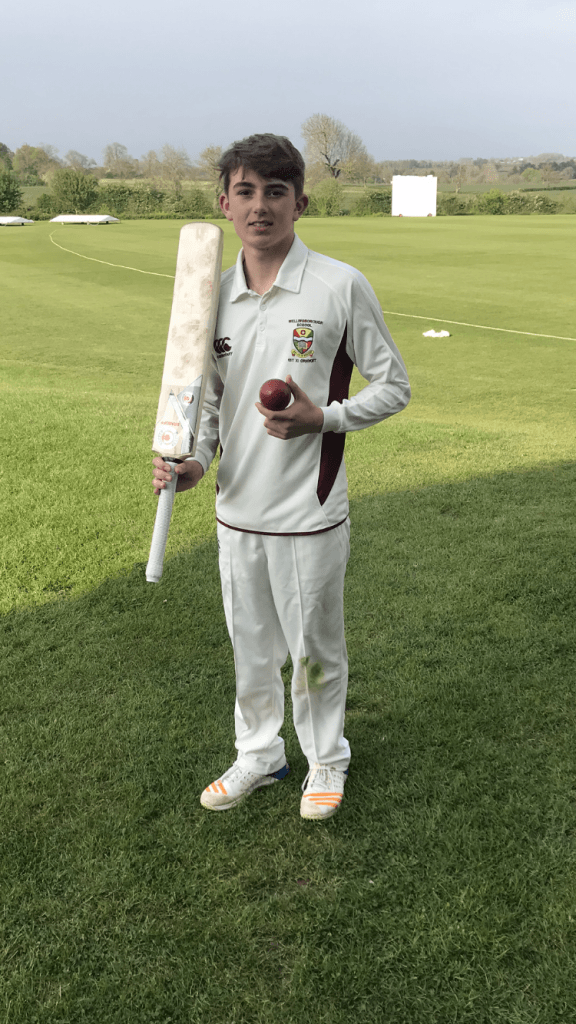 Jono Conolly of Brighton also turned in a virtuoso all-round display, hitting 138 from 100 balls, with thirteen fours and eight sixes. He then followed this up with five for 24 from 9.3 overs to seal the game with nine balls to spare. Four of his wickets were bowled and one LBW.

St Albans have started their season impressively with seven wins on the trot and an impressive win against local rivals Haberdashers’ Aske’s though it was a game where batting was difficult early and much easier later; the toss was vital. Dauntsey’s have also started impressively with five wins, led by Jack Butler’s fine off-spin in his first season.